Sacred Waters Kirtan has been making music out of South Bend, Indiana for fifteen years. With the powerhouse songwriting and lead vocals of Allen DeSomer, and a rocking world percussion sound, participants regularly tell the group after attending their kirtans, they feel renewed, at peace, and transported into the Oneness to which we all belong.

Sacred Waters Kirtan is an ensemble of musical seekers who combine diverse backgrounds in theology and world religions, music therapy, sound healing, meditation, ecstatic dance, and world percussion. But each member has one thing in common: a commitment to serve others through the Yoga of Sound. Using call and response chanting with easy, repetitive melodies and joyous danceable rhythms, the songs set free the chattering mind, deepen the breath, and create a state of calm, where the Eternal Love that lies in each heart can unfold and open.

Sacred Waters kirtan has played in churches, yoga centers, outdoor festivals, community centers, coffee houses, and venues as diverse as the Hindu Temple of Greater Chicago and the Basilica of the Sacred Heart Catholic Church in Notre Dame, Indiana. In 2013, Sacred Waters Kirtan was featured at an international celebration of Vivekananda's 150th year anniversary hosted by the Vedanta Society of Chicago. It was that very city where Vivekananda came from India in 1893 to the Parliament of World Religions to work to create a global dialogue of faith traditions. It was Sacred Waters KIrtan's honor to lead a large crowd of swamis, nuns and other interfaith participants from around the world in celebratory song.

What Is "Kirtan"?
Chanting is found in many of the world's religious traditions: the Gregorian mode of Catholics, the Zikr of Islamic mystics, the Judaic chant of the Qur'an, the Mahayana sutras of Buddhist monks, the Bhajans of India, and in the rituals of indigenous traditions of African, Hawaiian, Aboriginal, and Native American shamans. But chanting was usually reserved for the realm of monastics, cantors, priests, monks, sannyasins or shamans. Often the vocal or melodic structure of chants took years of study, training, and apprenticeship for chant leaders. From the ancient Byzantine octoechos modal structure to the overtone throat singing of Tibetan Buddhists, these devotional rituals were not accessible to the masses of religious followers. But what is unique about kirtan in the history of chant is that what began as an Indian non-violent social reform movement brought about devotional singing in a simplified version across caste lines to everyone. We see a Christian counterpart in the Taize movement in Europe which flowered in the 1940's.

Do I Have to Be Religious or Know How to Sing to Come to Kirtan?
No.  Whatever sacred path you walk is honored. If you are drawn to come, we welcome you here. Our goal is to promote unity. You do not have to be a "singer" or have any musical background.  Some people use our kirtans as spiritual devotion and some people come for stress reduction and health benefits.

What is the Yoga of Sound?
Kirtan's devotional, singing meditation is also a listening and interactive sound healing experience. With an impressive 2,000 year history, the use of sound and music as a spiritual path in the Hindu tradition, is referred to as Nada Yoga, literally translated, Sound Yoga. Kirtan falls under Nada's Bhava Yoga, from the Bhakti, or devotional tradition in India.  In modernity, the widespread adaptation of kirtan in the West, has given rise to many national, regional and local kirtan groups with a wonderful diverse musical variety.  Kirtan has gained such prominence in the music world, it has generated an ever increasing fold of nominees and performances at the Grammy Music Awards.

Your Brain on Kirtan: What Scientists Are Saying:
Formal research on kirtan and the brain began in 2000. Conducted through some of America's leading medical schools, this data has neuroscientific implications for anti-aging, memory enhancement, cognitive impairment and dementia. Findings by the University of Pennsylvania showed that kirtan increased working memory by 50% and participants experienced greater mind clarity, empathy and emotional equilibrium.  Growing bodies of research published in prestigious medical journals have discovered what ancients have known all along: Chanting is good for you!


REVIEWS OF OUR NEW CD 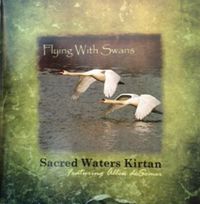 "Listening to the CD, "Flying With Swans" fills me with the joy of being alive. Call and Response Kirtan at it's best. I encourage repeated listening. Better yet, chant right along and increase your happiness." —Gary Goldberg, IN THE SPIRIT radio host.

“What a gorgeous, heartfelt collection of kirtan songs! Many of these songs take me back to the Sri Rama Foundation tracks I’ve loved for so many years—gorgeous melodies, beautiful instrumentals, catchy rhythms, strong lead female and male chanters, and a splendid full chorus of chanters. Bravo! This is a CD I will listen to!”— Ragani, Milwaukee's award-winning kirtan artist.

"Flying with Swans is the long awaited debut album from Sacred Waters Kirtan, Indiana's inspired and dedicated chant community. The 5 tracks on this 2014 release soar with elegant beauty while powerfully drawing listeners into the ancient practice of Kirtan (sacred chanting). The sturdy vocals and dynamic acoustic guitar of Allen DeSomer receive support from driving rhythmic grooves and are complimented by beautiful feminine response vocals. The regal and stately Shri Ganapati Om opens this journey, delivering listeners to Jai Ma, a classic rock influenced paean to the Divine Mother. Ekam Sat, a reggae influenced Kundalini chant, playfully guides us into a deeply devotional offering to the revered Indian Saint Sri Ramakrishna and his disciple Vivekananda. On the final track, the music explodes with exuberant hand clapping and foot stomping joy as we reach our heart-filled destination through the jubilant Rama Sita Ram. Flying with Swans is a wonderfully accessible invitation to the communal practice of sacred chanting - get yourself a copy and enjoy the ride!" — Mike Cohen, founder, Dattatreya Kirtan Institute and national recording kirtan artist.

Let Us Know What You Are Thinking

I want to express (again) my gratitude for your presence at Kirtan Fest Milwaukee this year. You WILL be invited back, the public is demanding it (also me, I am also demanding it!). We love love loved you guys! Keep doing what you're doing, all of you, forever.--Kaita Bliffert, organizer